From the International News:


"World Wide Fund for Nature-Pakistan (WWF-Pakistan) condemned efforts to capture and sell leopard gecko on World Animal Day on Friday, and vowed to play its part in the protection of this rare species which might otherwise become extinct.

Unfortunately due to lack of awareness, it is being exported as demand for the species grows as pets. People living in mountainous areas and near the habitats of the leopard gecko capture and subsequently sell it to the middlemen based in Karachi. According to the International Union for Conservation of Nature (IUCN), the reptile is of lesser concern but increasing pressure on its population can push it towards endangerment. Uzma Khan, Director Biodiversity, WWF-Pakistan, speaking on the World Animal Day, requested the government, civil society, conservation organizations and the media to play their role in the conservation of this unique species and to create awareness among the public."

Adding to this, she pledged the formulation of tight rules regarding the export of unique species, including the leopard gecko. She stressed that “people should not harm the leopard gecko, as it is not poisonous, neither can it make anyone wealthier overnight. People should abstain from catching it and selling it for the sake of money. We need to take action otherwise the species can get endangered ultimately leading to its extinction.”

Leopard geckos are kept as reptile pets. Their small size, robustness, attractive colours and relatively easy care makes them a good beginner reptile pet overseas. Steps are needed for its conservation and people should refrain from this business, otherwise the species is unlikely to thrive. The leopard gecko inhabits rocky stony terrain, mudflats with sparse grass and bushes. It is gregarious; several lizards live in colonies in holes in the ground, under stones, and in crevices among rocks. The gecko is nocturnal, coming out just after sunset to go foraging and returning just before dawn. It hibernates from October to February.

Posted by Karen-Owner of Pawsible Solutions and an AVID Crossfitter! at 5:06 AM No comments: 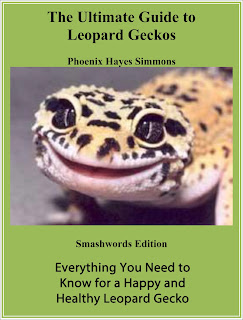 Posted by Karen-Owner of Pawsible Solutions and an AVID Crossfitter! at 6:49 PM 1 comment:

A Leopard Gecko enthusiast sent me this You Tube Video. It is funny. ENJOY!!!

Click here for the video!!
Posted by Karen-Owner of Pawsible Solutions and an AVID Crossfitter! at 6:13 PM No comments:

" ReptileChannel editors will select a number of photos to appear in the reptile slideshow. If your photo is selected, in addition to receiving the 100 Club Reptile Reward Points, you will be entered into a raffle in which one winner will be chosen at random to win a $50 gift card." click here to check out the guidelines...

Posted by Karen-Owner of Pawsible Solutions and an AVID Crossfitter! at 11:41 AM No comments:

Gecko Shopping at Amazon!! (Position Mouse Over Item to Enlarge)

Where are my visitors from?

Checking the Reptile Classifieds and Choosing a Leopard Gecko

Promote Your Page Too